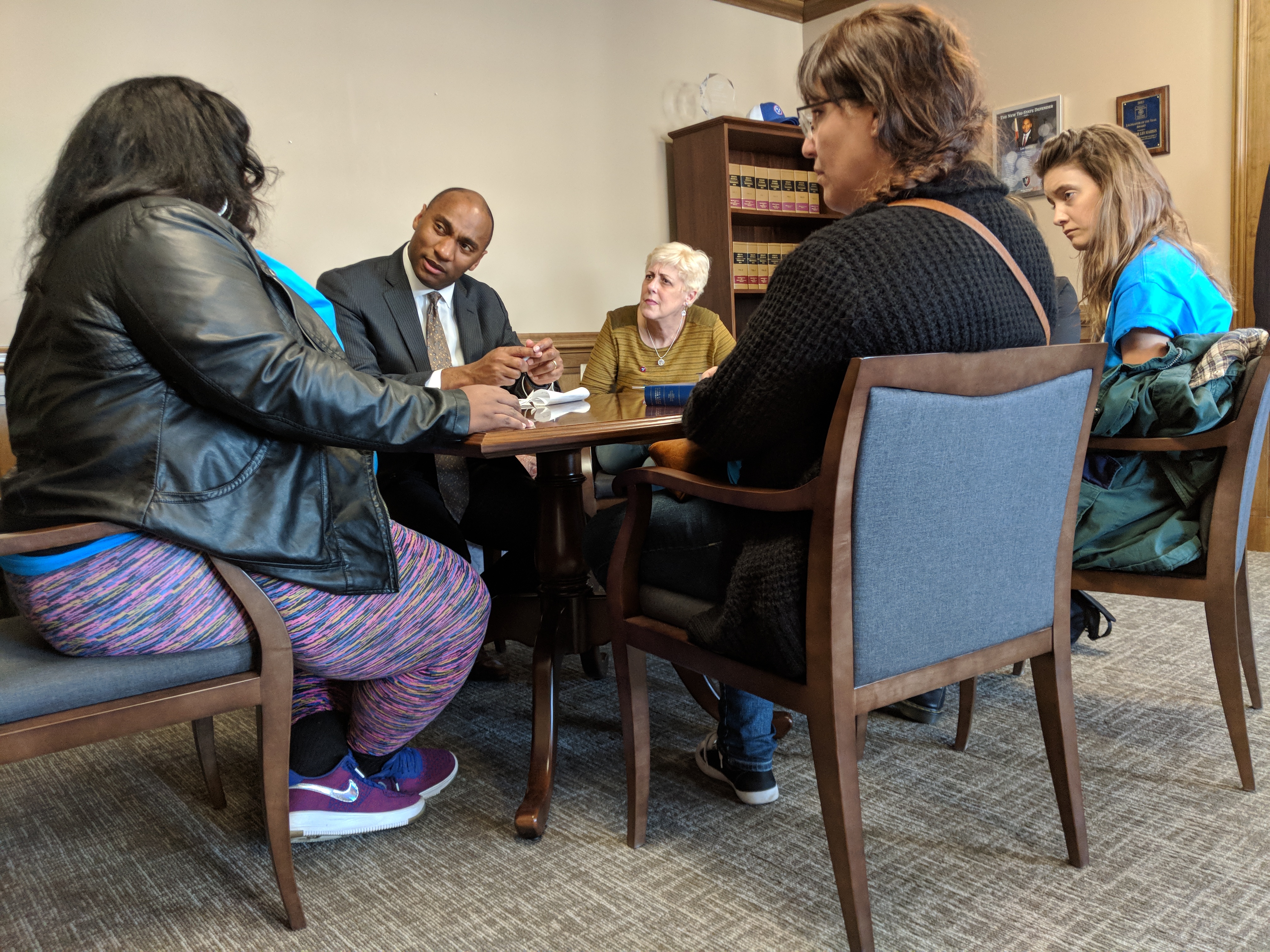 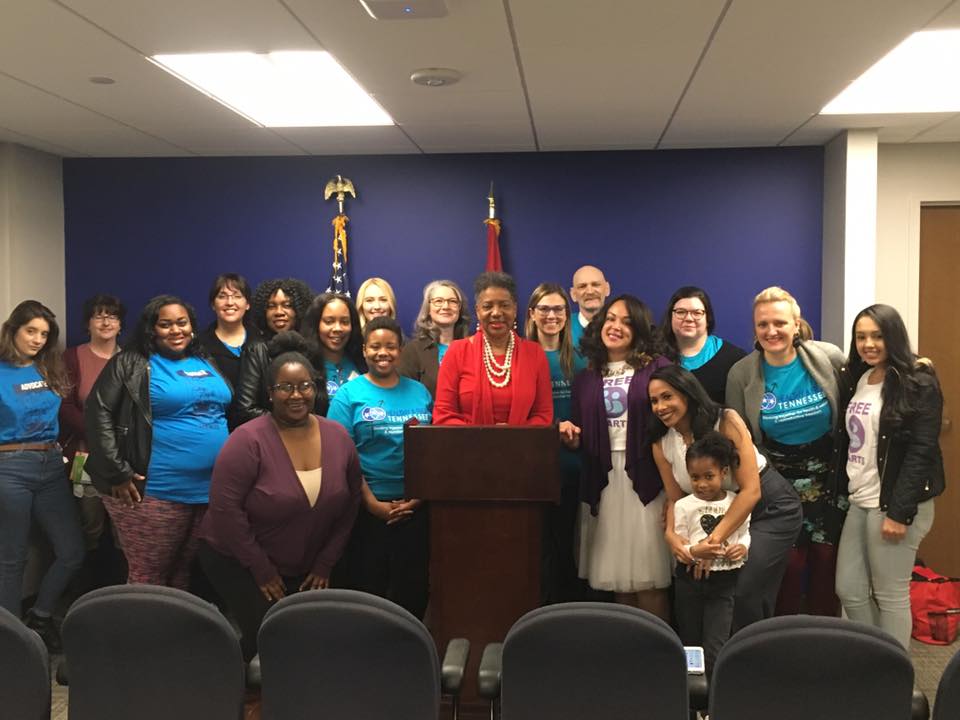 The 110th General Assembly ended on April 26, 2018. This was a tough year for advocates of reproductive health, rights, and justice. Once again, Tennessee made national news for the Tennessee legislature’s shameful and extreme tactics, which this year included a bill to erect a monument to abortion “victims,” and defunding clinics that provide abortions from TennCare. Healthy and Free Tennessee was mostly in defense mode, mobilizing our supporters to call and email their legislators to fight harmful legislation.

However, there were a few successes too, including a bill prohibiting sterilization as a bargaining chip in plea deals or sentencing and a bill extending the number of paid sick days workers can use for parental leave, championed by our coalition partner A Better Balance. We hosted a successful lobby day on February 13th, with a bus full of participants from Memphis who took part in CHOICES “Patients to Advocates” program, which empowers directly affected people to speak about their experience to help shape the narrative and improve policy.

Thank you to all of you who advocated for reproductive and sexual freedom and health to legislators this session in their offices, via email or phone calls, and especially to those who took action for the first time. It will take all of us to shift power in Tennessee, and we are in it with you for the long haul.

A detailed synopsis of wins and losses is below.

Substance Use and Pregnancy

SB 2674 sponsored by Senator Bailey / HB 2348 by Rep. Williams we opposed the original version of the bill because it mandated that prescribers who prescribe more than a five-day supply of opioids to a non-pregnant fertile women must counsel her to use IUDs or implants rather than provide the full range of birth control options, which we believe is coercive and wrong. Though that mandate was removed in the amendment, we do not support targeting a certain group of women for birth control counseling. Further, not all women of childbearing age will become pregnant or want to become pregnant, so there is no need to educate all women of childbearing age on the adverse effects of opioids on a fetus that does not exist. We wholeheartedly support educating women on the effects of opioids on their own health and wellness, but this bill went further than that and so we were opposed.

SB 0919 sponsored by Senator Dickerson / HB 0825 by Rep. Gilmore requires a court to sentence a person who was convicted of a nonviolent offense and is the primary caretaker of a dependent child to an individually assessed sentence based on community rehabilitation with a focus on parent-child unity and support. This would largely affect mothers, who are more often the primary caregiver.

SB 0244 sponsored by Senator Pody / HB 0108 by Rep. VanHuss in the original version, required fetal heartbeat testing prior to abortion and prohibited abortion from the point of detection of a fetal heartbeat. It would have amounted to a six week abortion ban, which is effectively a complete abortion ban since most people don't even know they're pregnant at six weeks. The bill was amended to be a required ultrasound and heartbeat reporting bill. This bill was yet another example of our legislators’ unrelenting attempt to promote their anti-abortion stance. Prohibiting abortion at six weeks of gestation was blatantly unconstitutional and so the amendment was offered, which requires fetal heartbeat reporting to the Department of Health. This does nothing to increase patient safety. It is yet another intimidation tactic to emotionally incite people considering abortion and adds another burdensome documentation layer for clinics.

SB 2148 sponsored by Senator Bell / HB 2251 by Rep. Matlock establishes that it is the policy of the state to avoid the use of state funds to promote or support elective abortions; instructs the commissioner of finance and administration to seek a waiver from the federal centers for medicare and medicaid services to require the exclusion of a provider from the TennCare program if inclusion of the provider in the program would result in the direct or indirect use of state funds to promote or support abortion. Read more here.

Erect a Monument to “Victims” of Abortion

SB 2227 sponsored by Senator Southerland / HB 2381 by Rep. Sexton as amended, urges the state capitol commission to consider placing a Tennessee Monument to Unborn Children on the capitol campus as a reminder of the inhumane practice of abortion; requires that the monument be funded by non-state sources.

End Barriers to Teaching About Sex Abuse in Public Schools

SB 2379 sponsored by Senator Yarbro / HB 2590 by Rep. Powell as amended, extends the number of paid sick days workers can use for parental leave.

SB 0752 sponsored by Senator Pody / HB 0892 by Rep. Pody enacts the “Tennessee Natural Marriage Defense Act” which defines natural marriage as between one man and one woman regardless of any court decision to the contrary.

AG to Defend Public Schools Who Discriminate Against Transgender Students

SB 2480 sponsored by Senator Hensley / HB 2620 by Rep. Holt expands the attorney general and reporter's duties to include representation of an LEA or certain LEA employees in a legal proceeding arising out of the LEA's adoption of a policy or practice designating multi-person restrooms, locker rooms, or other facilities for use based only on one's biological sex.

SB 1943 sponsored by Senator Kyle / HB 1982 by Rep. Jones adds gender identity to the list of victim characteristics in hate crime as an enhancement factor in sentencing.

Ensuring Protection from Harassment, Bullying in the Workplace re: Gender, Sexual Orientation

SB 2328 sponsored by Senator Kyle / HB 2613 by Rep. Mitchell prohibits public and private employers from requiring an employee or prospective employee to execute a non-disclosure agreement with respect to sexual harassment in the workplace as a condition of employment.

SB 2505 sponsored by Senator Ketron / HB 2032 by Rep. Coley allows a court to expunge the records of a person convicted of prostitution or aggravated prostitution if the conduct upon which the conviction is based was found to have occurred as a result of the person being a victim of human trafficking. A person commits aggravated prostitution when, knowing that such person is infected with HIV, the person engages in sexual activity as a business or is an inmate in a house of prostitution or loiters in a public place for the purpose of being hired to engage in sexual activity. TCA Title 39, Chapter 13, Part 5, 516.