Punishment and criminalization do nothing to address the public health challenges Tennessee is facing. Rather, criminalization efforts have proven time and again to bring harm to Tennesseans, our families, and our communities. When lawmakers enact laws and strategies that punish people for their reproductive choices and sexual health needs, they are attempting to take away the ability and rights of people to make decisions on behalf of their own bodies. They are attempting to shift the burden of responsibility for the creation and maintenance of healthcare solutions away from themselves as a body of elected public servants and onto individual bodies. These laws and policies are highly discriminatory in their enactment and enforcement. They have primarily targeted and harmed individuals and communities of color, pregnant people, low-income and uninsured people, and people living with diagnoses that society/culture actively stigmatize. The Healthy and Free Tennessee coalition rejects policies that criminalize bodies and individuals' healthcare choices/needs. People should never be threatened, intimidated, or otherwise coerced into or away from seeking healthcare. We advance policies that center directly-impacted people's experiences, that fill gaps in accessible care in our communities, and that nurture an environment where people are empowered to make the reproductive and sexual healthcare choices that make the most sense for them and their lives.

Healthcare NOT Handcuffs: Defeating the Dangerous "Fetal Assault Law"
In 2014, Tennessee became the first state to pass a law specifically allowing pregnant people to be charged with assault against 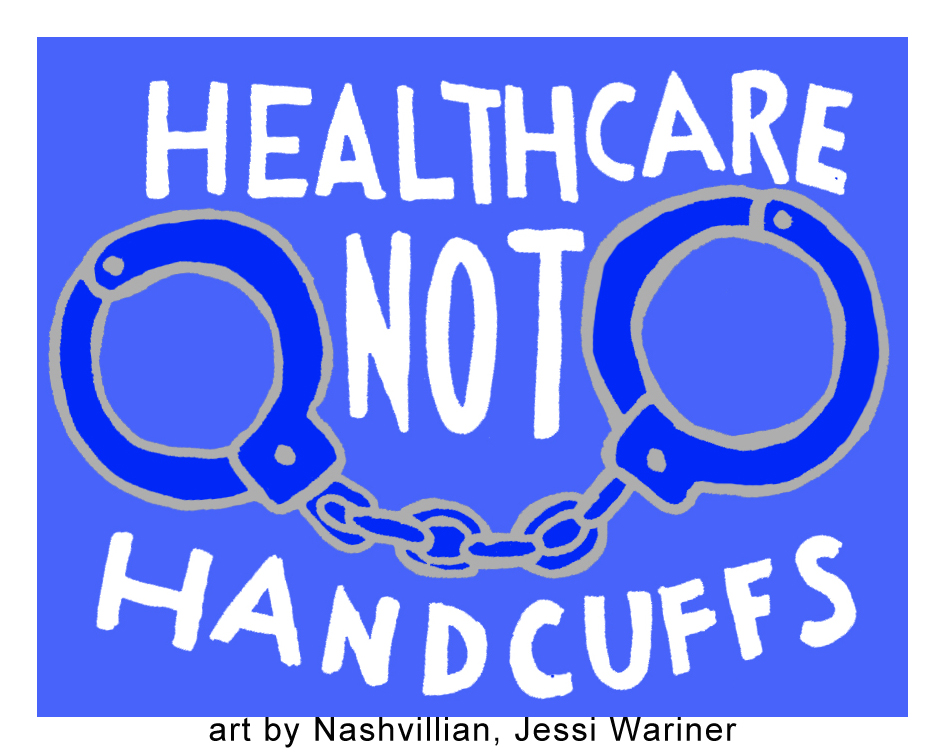 their pregnancies. As part of a growing trend in state governments to punish pregnant people for their pregnancy outcomes, TN's "Fetal Assault" law targeted women who used or were suspected to have used narcotics during pregnancy. The law was passed with a built in "sunset" clause that meant it would expire after two years if no efforts were made to modify or extend it. The law was also passed with no built-in mechanisms for legislators to monitor its impact.

Under the shared banner of Healthcare NOT Handcuffs (a nationwide movement aimed at dismantling dangerous anti-person drug policies) a diverse collaboration of directly impacted women, other advocates, legal experts, healthcare and drug treatment professionals, researchers and elected officials, uncovered and amplified the stories of women across the state who were thrown in jail as a result of this law. We amplified the stories of pregnant people who were unable to access prenatal care because of fear of incarceration. We shared the stories of drug treatment centers that received no additional funding or support to expand services for pregnant people and their families in need of care. We demonstrated that the strategy of threatening pregnant people who are navigating disordered use of narcotics with jail time did not address or solve the challenge of the rising number of TN newborns diagnosed with Neonatal Abstinence Syndrome (NAS). We also organized the Pregnancy, Drug Use, and The Law Conference and report. By centering the experiences of those most impacted by the law (pregnant people, newborns, care providers, and lawyers) we demonstrated that the law was only successful if the intended impact was to harm and punish pregnant people and their families. Read our fact vs myth fact sheet researched and compiled by experts in opposition to the law.

Amid testimony and submission of evidence that the "Fetal Assault Law" was creating harm to families and newborns, our coalition was able to block an attempt by bill sponsors to make the law permanent. In July 2016, the law officially ended. Following the end of the law, advocates prepared a series of resource fact sheets designed to help inform prosecutors, treatment providers, and pregnant people experiencing disordered drug use that the law was over and that resources for care do exist. We continue our legislative advocacy efforts to insure care providers have the resources they need to support pregnant people and their families. Please check out the resources: for pregnant people, for treatment providers, and for practitioners of law.

Abortion is Healthcare. Blocking Access to Care is Cruel.
The case and experience of Tennessean Anna Yocca again demonstrates the failure and damage both of policies that restrict access to abortion and policies that punish people for taking control of their own care in a landscape that limits and erases options. Ms. Yocca was held in jail awaiting trial for over a year after being arrested in December 2015 under claims that she had used a coat hanger in an attempt to terminate her 24 week pregnancy. Ms. Yocca was finally released from jail after pleading guilty to a 200 year-old punitive measure that criminalizes abortion. Learn more about the context around and broad implications of Ms. Yocca's case by reading our joint press statement with partner National Advocates for Pregnant Women.

HIV Law Modernization. Bodies are not Crimes.
Tennessee is one of thirty-two U.S. states with laws that discriminatorily target and criminalize individuals based on their HIV+ status. Tennessee currently has both a "Criminal Exposure Law" and an "Aggravated Prostitution Law" through which individuals who are living with HIV can and have faced felony charges BECAUSE they've been diagnosed with HIV. These laws have proven very dangerous and destructive to the individuals charged and to their families and communities. Healthy and Free TN is working in coalition with directly impacted individuals, ally advocates, and legal experts to change these laws. Follow partner Tennessee AIDS Advocacy Network (TAAN) to learn more and check out the Our Work section of the website for ways you can enter and follow the fight.