In the United States, Black women are four times more likely to die in childbirth or of pregnancy-related causes than White women. To draw attention to this shocking fact, advocates across the country and here in Tennessee are participating in Black Maternal Health Week this week.

A national shame, the United States is the only developed country with a rising maternal mortality rate, largely driven by racial disparities. Research suggests that half of these deaths may be preventable. This is a human rights crisis.

The staggering rate of Black maternal mortality, due to exposure to racism, impacts Black women from an array of backgrounds. Research has shown that education level and socioeconomic status offer no protection. In a study from New York City Department of Health, it was found that Black women with undergraduate degrees who gave birth were more likely to suffer from pregnancy-related complications than White women without a high school diploma. Additionally, Black infants are twice as likely to die than White infants —11.3 per 1,000 and 4.9 per 1,000, respectively—a racial disparity that is wider than in 1850 during chattel slavery.

Across the country, conservative lawmakers are aggressively rolling back reproductive rights and access, which disproportionately impacts Black women. Since 2010, 38 states have passed more than 300 abortion restrictions. Last year, Tennessee alone counted 11 abortion restrictions; and, since Governor Bill Haslam signed HB 2251 defunding reproductive healthcare clinics that provide abortions last week, we now have 12. This bill will hinder Tennesseans from accessing holistic reproductive health care, including midwifery, prenatal, and birth services through the new birthing center that CHOICES plans to open next year in Memphis. These are life-saving services.

Debates about the morality of abortion in the United States and in Tennessee fail to mention that unsafe abortion is one of the leading causes of maternal mortality globally. It is unjust and reprehensible to allow women to die from preventable causes by obstructing their access to life-saving health care.

Eager to waste Tennessee taxpayer money defending unconstitutional anti-abortion laws, Tennessee continues to turn our back on Black, poor, and rural mothers. Tennessee has shamefully not expanded Medicaid; importantly, 54% of births in Tennessee are covered by Medicaid. As a consequence, Tennessee leads the country in the loss of rural hospitals. Because of the high cost of labor and delivery and relatively lower birth rates compared to urban areas, obstetrics-gynecology care is often the first service to be cut in struggling rural hospitals. Rural hospital closures mean worse care for pregnant people. This helps explain the higher maternal mortality rate in rural areas.

In a more hopeful move, in 2016, Tennessee passed legislation to establish a maternal mortality review board and to collect and aggregate data on the causes and incidences of maternal mortality. Prior to 2016, maternal death was not tracked by the state of Tennessee in a such way to be useful for prevention. The data are unsurprising and yet, still shocking. 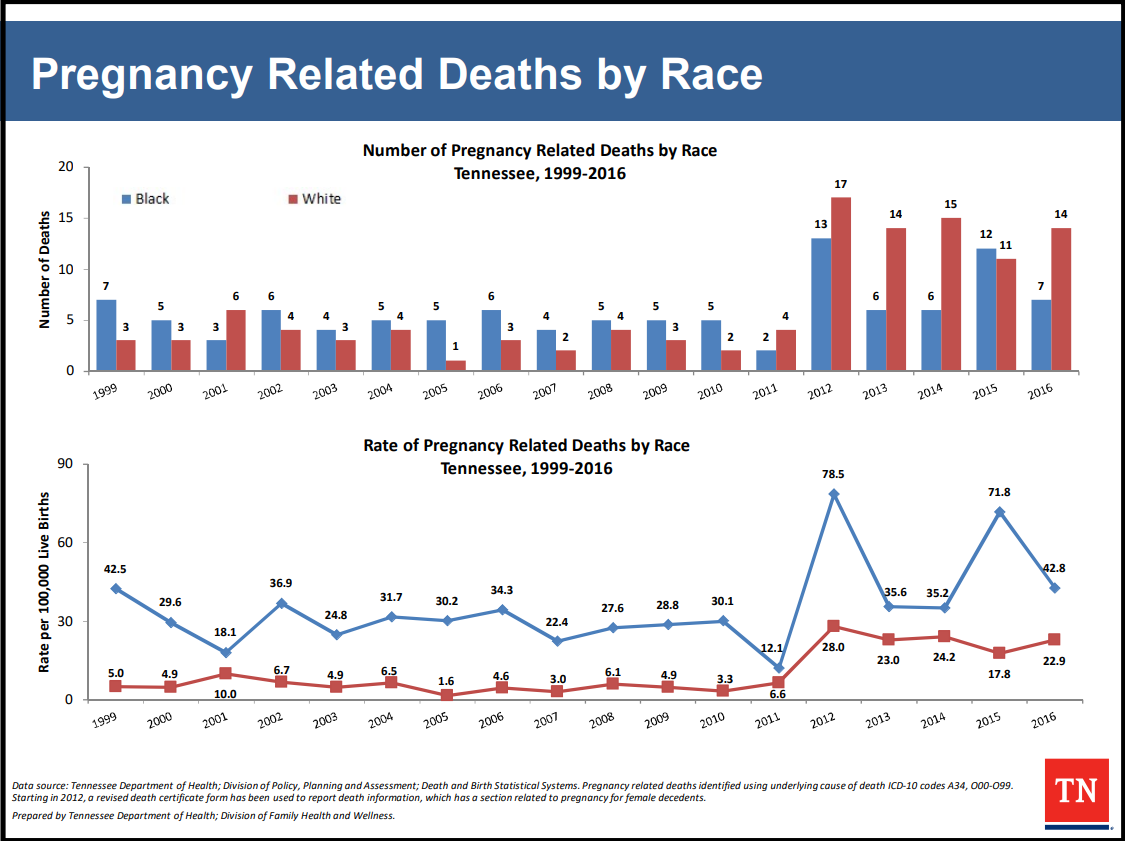 Image and data from Tennessee Initiative for Perinatal Quality Care

Preliminary data show that there are racial disparities in Tennessee, mirroring the national trend. Black women are dying at two to four times the rate of White women in our home state. We have work to do, Tennesseans.

Black maternal mortality has been widely overlooked nationwide even though Black women’s risk of maternal mortality has been higher than White women’s risk for the past six decades. Recently, however, the has issue gained more national attention thanks to the work of Black women and mothers who have been organizing around the issue. We are proud to elevate their voices and join the growing chorus of people calling for change.

In solidarity with these Black women advocates, and partnership with the Black Mamas Matter Alliance, Healthy and Free Tennessee is hosting three free statewide screenings this week (in Nashville today Monday April 16th, and in Memphis and Knoxville on Tuesday April 17th) of the documentary film The Naked Truth: Death by Delivery which examines the rising maternal mortality rate in the U.S., particularly the staggering mortality rate of Black mothers. These screenings will be accompanied by panels and discussions of what we can do here in our home state to improve maternal health and close the racial gap.

In alignment with the Reproductive Justice Framework, Healthy and Free Tennessee believes in the right of women and individuals to decide if and when to have a child and the conditions under which one will give birth. Exposure to racism is preventing Black women from fully exercising this right. Together, we must act to highlight and address Black maternal health disparities in Tennessee, and work to eradicate this injustice. We hope you will join us.