As advocates, we bear the continued responsibility to envision and fight for reproductive and sexual health care access, sex education, and economic and judicial policies that support the whole health and wellbeing of all Tennesseans and our communities. Over the past four years, Healthy and Free Tennessee partners and supporters have fought against a rapidly rising tide of discriminatory and anti-health laws written and approved by our state legislature.

In spite of these laws--laws meant surely to divide, silence, devastate and starve the majority of Tennesseans--HFTN partners and supporters have grown stronger, more coordinated and resolved to nurture a sustained statewide and unapologetic movement for reproductive freedom.

Now more than ever we commit to a present and future where we all have access to the resources we need to make informed choices about our health without stigma, shame or discrimination. We vision, fight, and build best when our movements are cross-issue, diverse, safe for the most vulnerable and directly impacted, and willing to confront hard truths not solely about our opposition but also about our own tendencies and struggles. This year, Healthy and Free TN recommits to showing up, supporting, and sustaining opportunities for all Tennesseans and our local and statewide movements for freedom and justice to grow in collective strength, power, and health.

1.) The TN Call to Conscience Multi-Issue Interfaith Rally will take place in Nashville at the Capitol on Tuesday, January 10th from 11am-1pm. Learn more here! 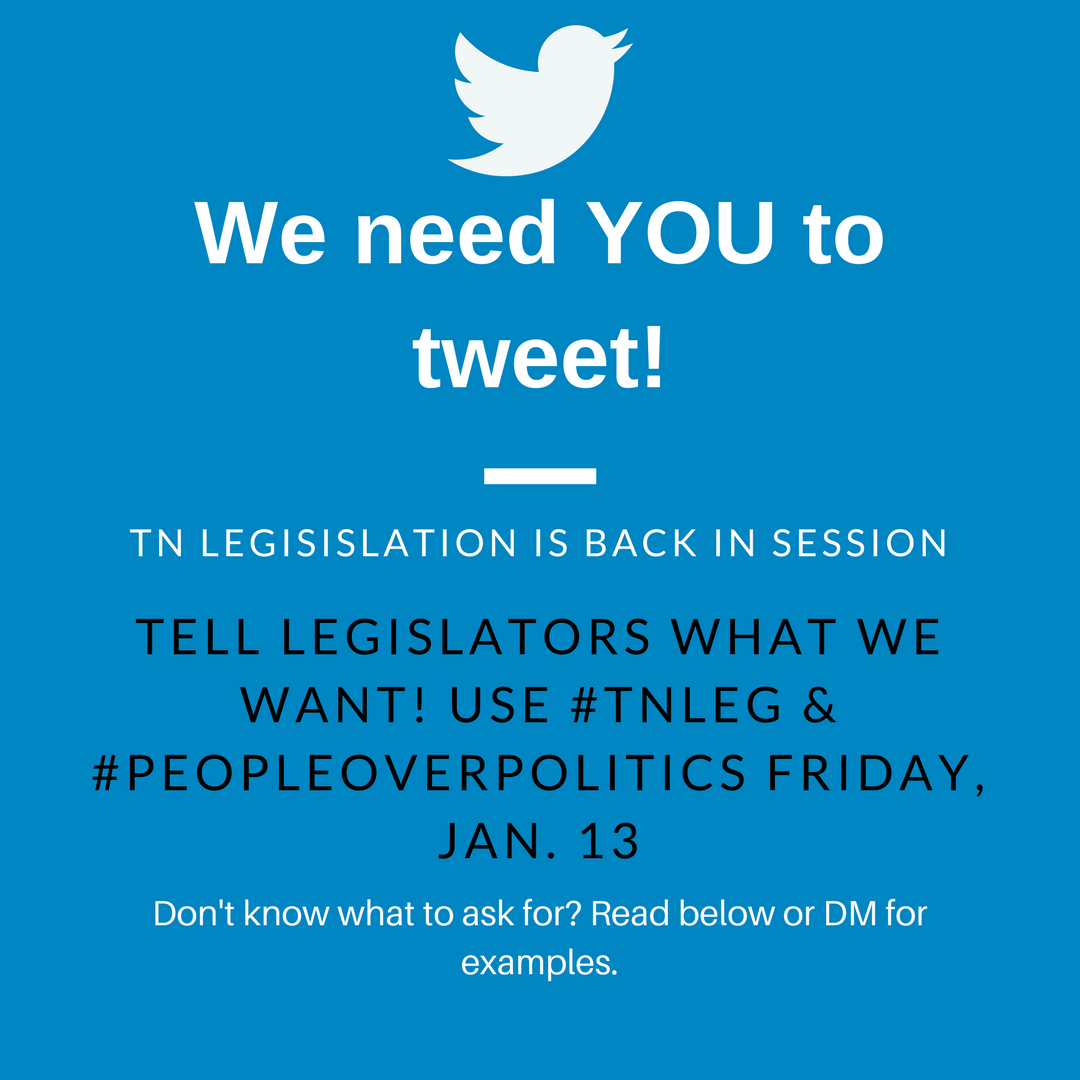 2.) Join us this Friday, January 13 on Twitter for the #PeopleOverPolitics Tweet Storm. Starting at 8am CST/9amEST tweet your TN Senators and Representatives with clear messages about your priorities. What do you want your Rep to know and work toward and against this year? Want unrestricted access to abortion services and other reproductive health care? Want to make sure pregnancy outcomes aren't criminalized? Want to see modernization of TN's outdated and discriminatory HIV laws? Be sure to use hashtags #PeopleOverPolitics and #TNleg

3.) Join in on the Nashville United In Action Day of Action at the Capitol on Friday, January 20th (Inauguration Day). "Donald Trump announced his 100 day plan, including attacks on women, immigrants, Muslims, workers, tenants, LGBTQ communities, health care, and the earth... What's our response?" Learn more about this day of action of which HFTN is a sponsor along with many other awesome organizations!

4.) Participate in one of the 200+ Women’s Marches happening globally on Saturday, January 21st after the inauguration of President-Elect Donald Trump. Nashville, Memphis, and Chattanooga will host solidarity marches and many Tennesseans will also travel to DC to join with the anticipated 200,000 people gathered for the rights of women, femmes, and everyone to make choices for own bodies free of violence and intrusion. Join Nashville Feminist Collective at their post march "Teach-In: Feminist Activism in TN 101," starting at 12:30pm in Legislative Plaza!

5.) Register for the 2017 HFTN Lobby Day! Join us in Nashville on Tuesday, February 21st to meet with representatives, sit in on hearings, and learn more about the legislative goals of HFTN organizational partners.

6.) Following the 2016 elections, use the General Assembly website's "Find My Legislator" feature to double check who your current Senators and Representatives are. Save their phone numbers and e-mails--we'll be contacting them a lot.

And as always, if you aren't yet, please do become an official partner of the coalition whether as an individual or organization. Follow us on Facebook, Twitter, and in your inbox for updates on our legislative agenda, action alerts, trainings, and opportunities to share your skills in support of a Healthy and Free TN!